This page applies to company-managed projects only.

Please note that epics can be renamed. The information in this article is relevant, regardless of what epics are called in your instance.

Before you start using the Epic Burndown report, you should get to know how it works.

*not the same as the velocity described in the Velocity Chart 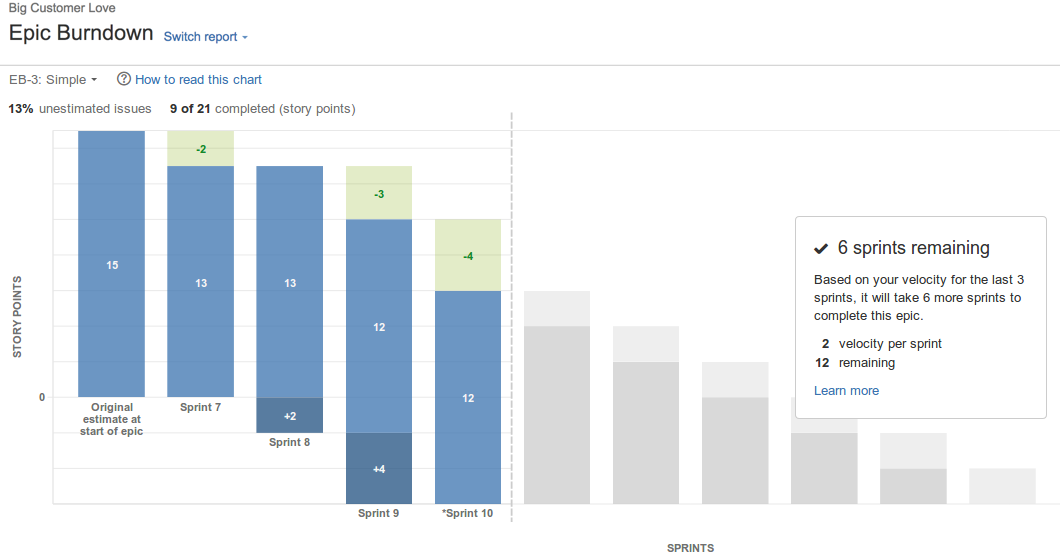 For example, in the chart above, if your team had not completed more than 2 story points in sprint 10, then the work completed in sprint 7, sprint 8, and sprint 9 would be used to calculate the velocity — rather than sprint 8, sprint 9, and sprint 10.

The following questions and answers cover the other key functions of the Epic Burndown report:

What determines the first and last sprints shown on the chart?

For example, if you have only estimated 10% of the issues in the epic, then the report predicts the completion of work for the epic based on the 10% of the total issues. In reality, your team probably has much more work left to complete.

If a completed issue is reopened or added/removed from an epic, how is it represented?

Issue completed in an epic, but removed from the epic afterwards:

Issue completed in another epic, but later included in the epic (shown on the report):

Issue completed in a sprint, but only added to the epic afterwards:

If your issue is in an unmapped status (i.e. status not mapped to a column), it will not be considered in the Epic Burndown report. That is, it won't be included in the sprint bars, the % unestimated issues, remaining story points, etc.