View and understand the control chart

The Control Chart shows the Cycle Time (or Lead Time) for your product, version, or sprint. It takes the time spent by each issue in a particular status (or statuses), and maps it over a specified period of time. The average, rolling average, and standard deviation for this data are shown.

A Control Chart helps you identify whether data from the current sprint can be used to determine future performance. The less variance in the cycle time of an issue, the higher the confidence in using the mean (or median) as an indication of future performance.

With the control chart, you can:

Here are some of the ways that you could use a Control Chart:

If you are using Internet Explorer 8, the Control Chart will not work.

What is the cycle time and lead time?

Lead time is similar to cycle time, but is the time taken from when an issue is logged (not when work begins) until work is completed on that issue.

How is cycle time determined?

For example, if you are using the 'Jira Software Development' workflow, you may consider work to have started on an issue when it transitions to 'In Progress', and work to have completed when it transitions from 'In Review' to 'Done'. You would show this on the Control Chart by selecting 'In Progress' and 'In Review' as the Columns, as this would show the time that issues have spent in those two statuses.

You can also configure the Control Chart to show lead time data instead of cycle time data. Just select the statuses that represent the time spent on an issue; from the time it is raised until work was completed.

How is rolling average calculated?

The rolling average (blue line on the chart) is issue-based, not time-based. For every issue shown on the chart, the rolling average (at that point in time) is calculated by taking the issue itself, X issues before the issue and X issues after the issue, then averaging their cycle times. 20% of the total issues displayed (always an odd number and a minimum of 5 issues) is used in the calculation.

For example, in the screenshot below, at the point of time where an issue (green dot) is shown, the rolling average is calculated as follows:

If the Timeframe is reduced to 'Past two weeks', the number of issues used would reduce, as there are fewer total issues available to use for the calculations.

What does the blue shaded area represent?

The blue shaded area of the control chart represents the standard deviation — that is, the amount of variation of the actual data from the rolling average.

The standard deviation gives you an indication of the level of confidence that you can have in the data. For example, if there is a narrow blue band (low standard deviation), you can be confident that the cycle time of future issues will be close to the rolling average.

What do the dots on the chart represent?

As shown on the chart legend, each dot represents an issue or a group (cluster) of issues:

Why does the scale of the Elapsed Time axis change when I change Timeframe?

If the maximum Elapsed Time value on the chart is less than 30 days, then a linear scale is used for the y-axis. If it is 30 days or greater, than a cube-root power scale is used.

When you change the Timeframe, you may include issues with an elapsed time of greater than 30 days when you previously did not, or vice versa. This will change the scale, as described above.

Learn how to tweak your Control Chart to show the data you need with the following examples:

The Control Chart can help you identify outliers. On closer examination, you may determine that certain outliers are invalid due to human error. For example, you may have a story that was started but stopped, then eventually dropped back to the backlog, but not returned to the 'To Do' status. The time that the issue spent 'In Progress' would incorrectly skew the data for your Control Chart. 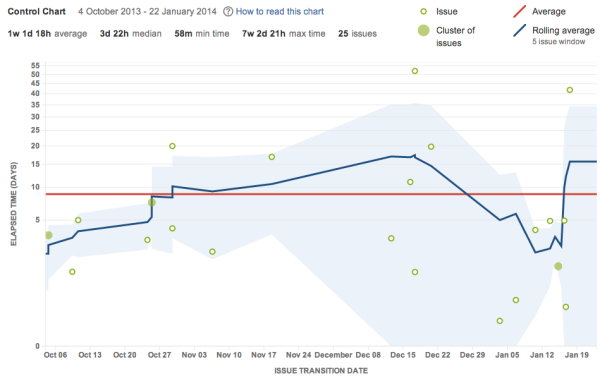 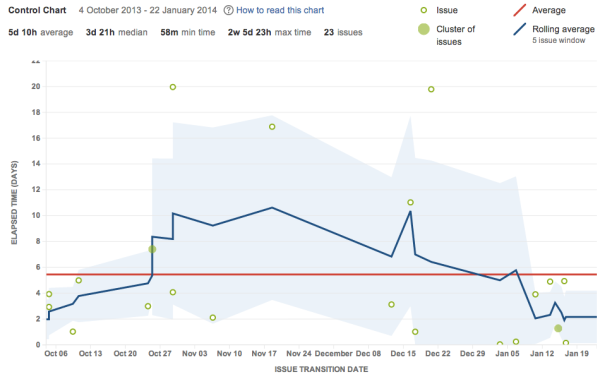 In a Control Chart, you generally want to track the issues that are resolved as 'Fixed'. Issues that are triaged and resolved as a duplicate, answered, tracked elsewhere, etc can skew the data, bringing the average cycle time down considerably.

Example Control Chart including issues where the resolution is not 'Fixed' 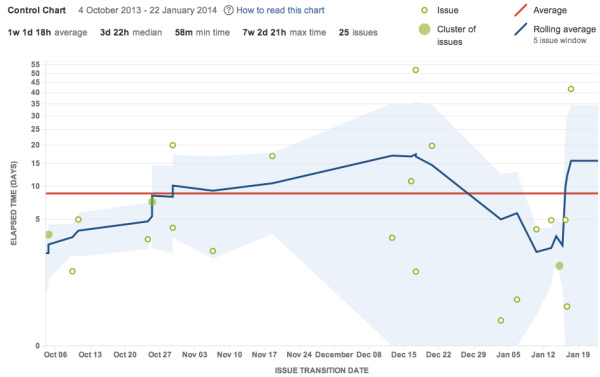 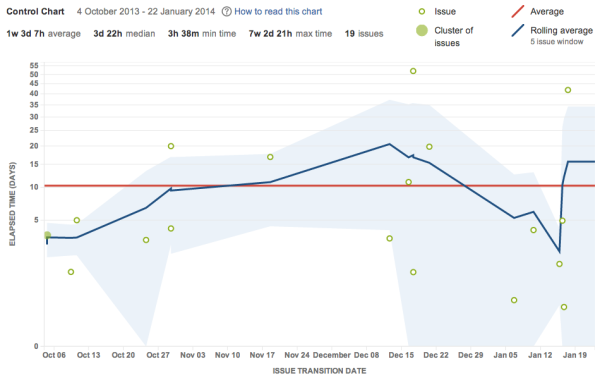 Example Control Chart including all issues 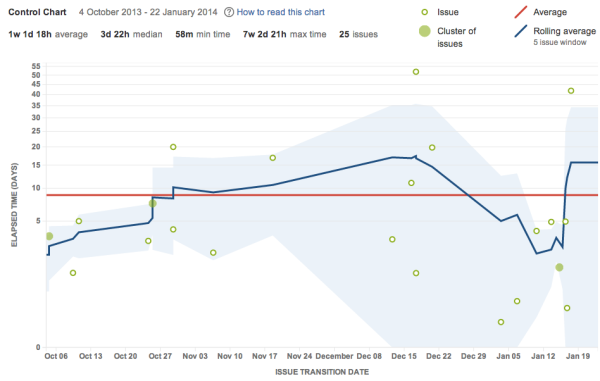 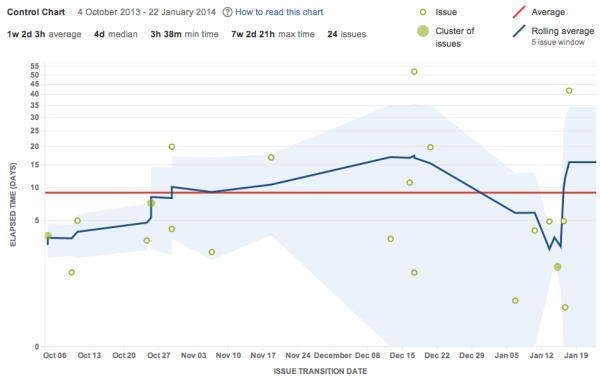 Learn how to interpret a Control Chart with the following examples: 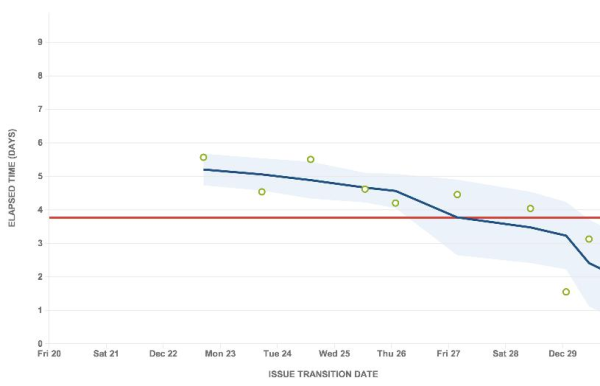 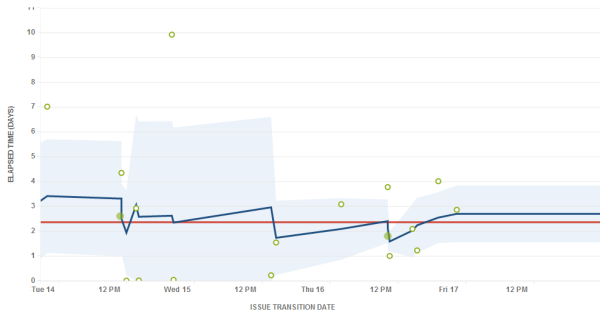