Advanced Roadmaps is only available as part of Jira Software Cloud Premium and Enterprise.

In the other sections of this guide, we’ve covered all of the tools available to you in Advanced Roadmaps. But thanks to its open-ended nature, it can be difficult to string all of these concepts together.

To demonstrate one way that you can combine all the features available to you, let’s look at how planners at Veridian Dynamics use Advanced Roadmaps.

Ted leads the ADR Team at Veridian Dynamics. When he looks at the workload for the next year, he sees that his team is overwhelmed and requests the budget for another developer. To strengthen his case, Ted uses Advanced Roadmaps to demonstrate the positive impact another developer would have on the team’s development timelines and help them achieve their goals.

How Ted sets up his plan

Ted creates a plan creatively named “Ted’s Plan”, and uses the ADR Board as his issue source. Next, he adds the ADR Team in the Teams menu, and associates it with the ADR Board:

He can now begin to plan.

How Ted plans work for his team

In order to prove how another developer will help his timelines, Ted needs to illustrate the current expected deliverable dates. He estimates all of the issues on his timeline to the best of his ability. A lot of his work stretches far into the future, but he’s able to roughly state how long he thinks each individual task will take.

Once the issues are estimated, he groups issues on his timeline by Team and sets Advanced Roadmaps to schedule issues based on their sprint dates: 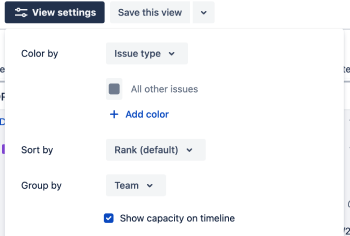 Then, using the capacity planning tool, he assigns work to each sprint to determine how many iterations of work his current team has on their plate, based on their current capacity of 30 story points:

By his current estimations, his team will take seven iterations to finish their current project. From here, he repeats the process with the next project, building his rough plan for the year.

Next, Ted needs to make a scenario where his team has a higher velocity. He enables scenarios in Advanced Roadmaps, and names this plan Current team: 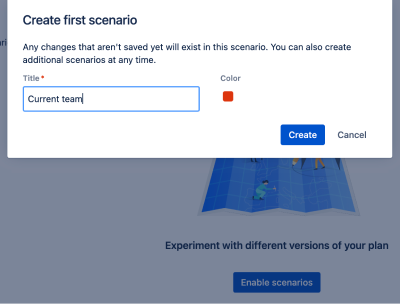 He then copies his existing scenario into his new scenario and names it New hire: 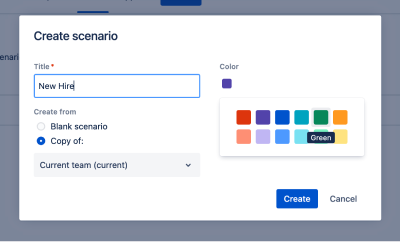 In his new scenario, Ted increases the sprint capacity to reflect the addition of a new developer, and then adjusts his issue assignments based on this new bandwidth:

When Ted presents this to his boss, he switches between the two scenarios to contrast the two timelines.

Learn more about capacity and velocity in Advanced Roadmaps