Before you can transition issues to columns on a board, your Jira administrator or board administrator will have already mapped workflow statuses to your board's columns. To know more about configuring these mappings, see Configuring columns.

Also, you can only transition an issue if you have project permission to move that issue to the status in the Jira workflow to which the column is mapped. Jira Software will respect your workflow configuration, and will trigger all your workflow validations, conditions, functions, and notifications when you transition issues (see Workflows for more information.) However, note that boards currently don't auto-assign issues to you.

Transitioning an issue can mean moving it to another status, or performing a "looped" transition where the transition allows you to perform an action but keep the issue in its current status. We refer to these looped transitions as issue actions.

To transition an issue to a new status

You can also see the issue workflow by selecting View workflow. 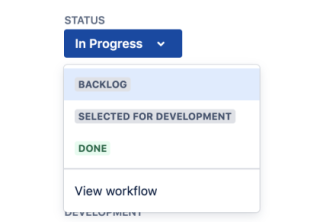 If you only have one action, select the name of the action at the top of the issue.

If you have more than one issue action: 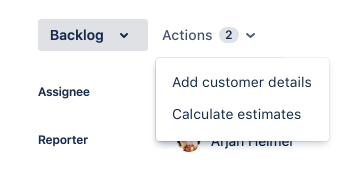 You must log in as a user with the Administer Jira global permission to edit workflows. For more information, see working with workflows.

Transition on a board

If the target column is associated with more than one status, when you hover the issue over that column, each possible transition will appear as a separate section with an outline. Complete the transition to the appropriate status by dropping the issue onto the section of the column.

Depending on the following conditions, you can press the Shift or Ctrl key to select and transition multiple issues from the backlog to the next status in your project's workflow:

Transition issues with subtasks in the Kanban backlog