Manage dependencies on the roadmap

Read more about troubleshooting issues in a team-managed roadmap

Your team might have one epic that's blocking the progress of another, or two epics that impact one another. The roadmap helps you visualize the dependencies between epics.

Link to other issues

Issue linking is activated by default. If your issue linking is OFF, a Jira admin can enable it. Once it's active, you can link between issues to create dependencies.

There are two ways to visualize dependencies on your roadmap.

Directly on your roadmap:

When using this method, your roadmap automatically configures the dependency (either blocks or is blocked by) based on the order of issues.

From the issue detail view:

Select the dependency line or the link icon on an issue to get a detailed view of its dependencies. If your epics have child issues with dependencies, they’ll show in this window when the epic is collapsed on your roadmap. 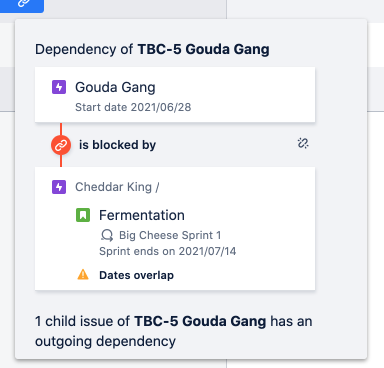 If one of your epics is scheduled to start before a dependent epic is due to finish, the dependency link turns red. This signals the potential for delay or risk. 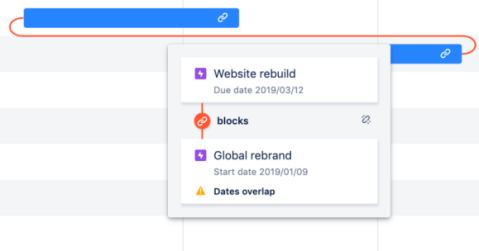 To remove a dependency between two epics, select Unlink issue or delete the issue link in the issue detail view.