To demonstrate how to develop, deploy, and manage applications using Jira Software and various connected tools, our team created ImageLabeller, a simple demo application built on AWS that uses machine learning to apply labels to images.

This page covers how to integrate Snyk with Bitbucket. Before you begin, we recommend reading the ImageLabeller architecture page for context.

As software applications grow in scale and complexity, the surface areas for security vulnerabilities and exploits grow with it.

Modern development practices include large amounts of code reuse. First, in the form of language-specific standard libraries such as the C++ STL, the Golang standard library, and Microsoft .NET. Second, in the form of open-source libraries found on places like Github. Much of this code is built using other libraries, introducing a web of dependencies into modern software.

This sheer amount of code leads to a high likelihood of security vulnerabilities being present. It's not possible to stay on top of vulnerabilities by manually checking all dependencies against CVE lists. Adding automated vulnerability scanning to CI/CD processes can help identify, and mitigate security risks.

Bitbucket, Atlassian's code collaboration solution, has invested in a deeply embedded native integration with Snyk, the leading provider of security solutions for developers. This means no apps to install or configure. You can see details of security issues right within Bitbucket. Once you enable it, Snyk automatically checks your code and its dependencies and alerts you of vulnerabilities that are present so you can fix them before you deploy.

There are a couple of ways to work with Snyk in Bitbucket. The first is to enable the native Snyk integration to Bitbucket via the Security tab on your repository screen. The second is to add a Snyk step to a bitbucket-pipelines.yml file. There is no downside to doing both. The Synk integration in Bitbucket provides quick access to vulnerability data to anyone looking at the repository in Bitbucket. You can then click through to the Snyk website for additional information on each vulnerability found. The Snyk step in a bitbucket-pipelines.yml file enables automatic scanning on every commit in a pipeline.

Adding the Snyk integration to Bitbucket

To add Snyk to a Bitbucket repository click on the Security tab, find the Snyk integration, then Try now. 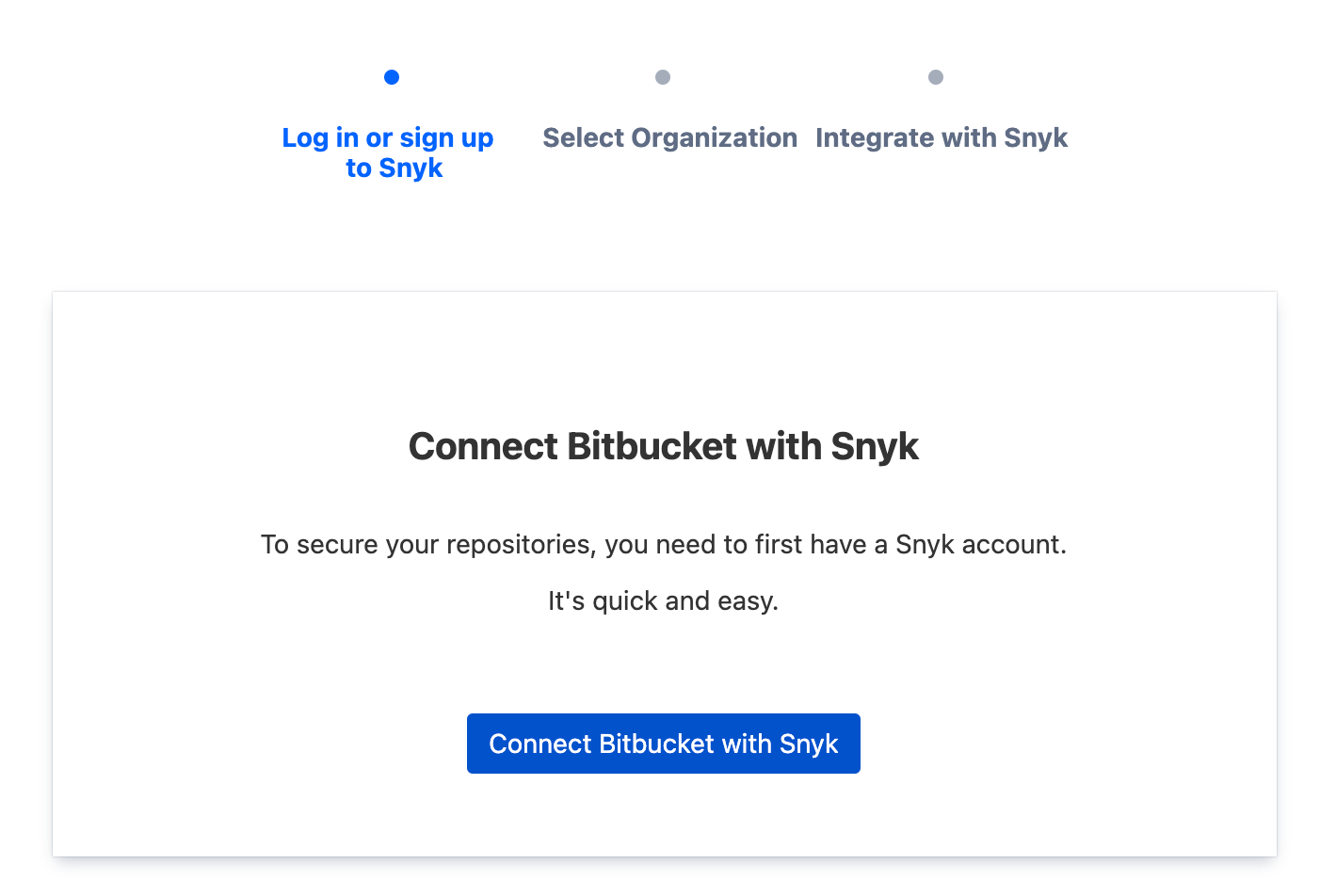 Once the integration is setup, close the tab.

Click on the new Snyk option that appears in the left nav. Then click on the go.mod file to drill in to see more detailed information. The Golang repository uses go modules to manage dependencies in this example. For other kinds of repositories, there will be different dependency files.

To learn more about how to fix each vulnerability, click visit Snyk to go to the Snyk website. 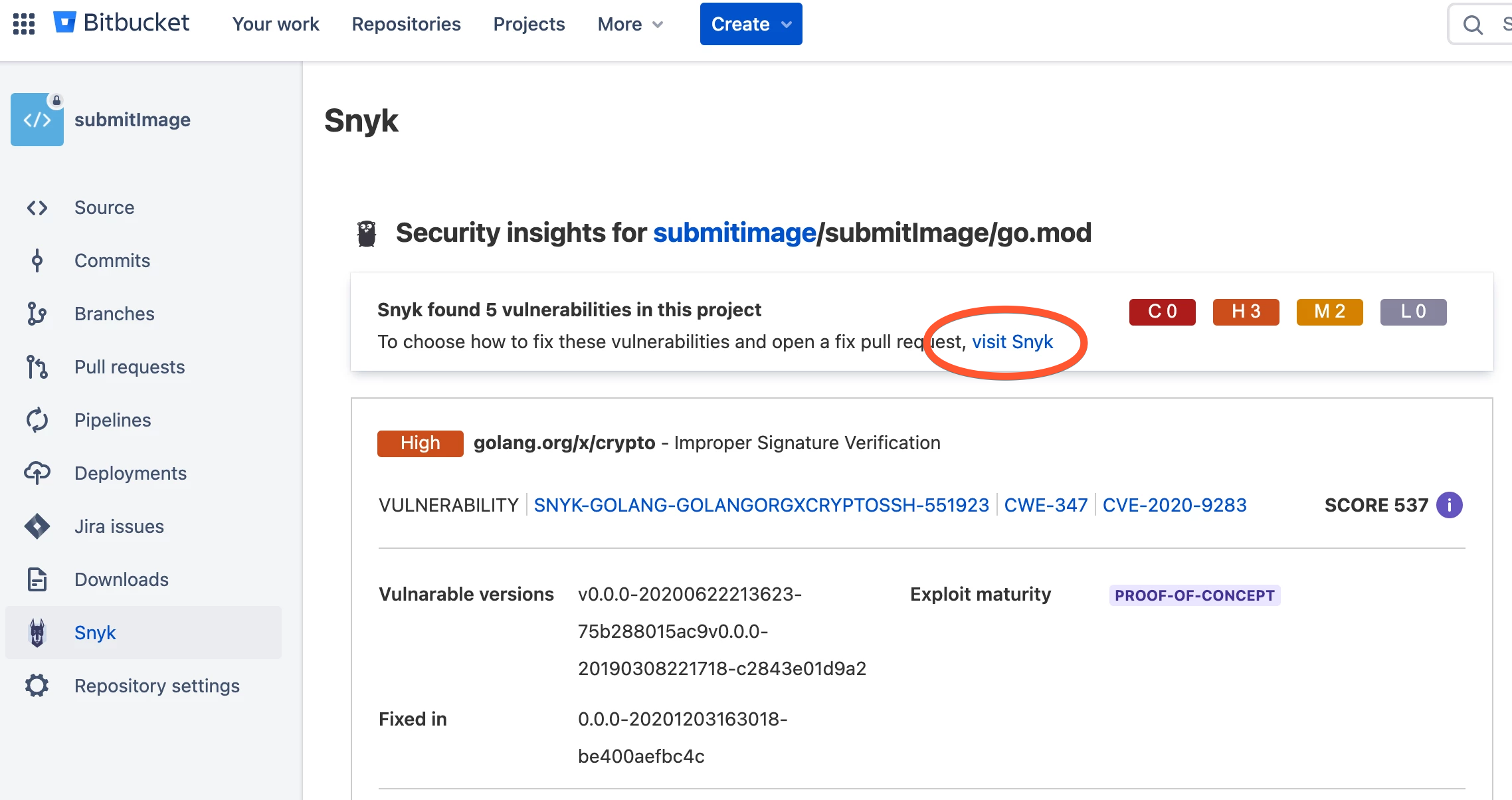 This view on the Snyk app is similar to the detail screen rendered in Bitbucket. This screen shows a list of vulnerabilities, along with additional information on each vulnerability. 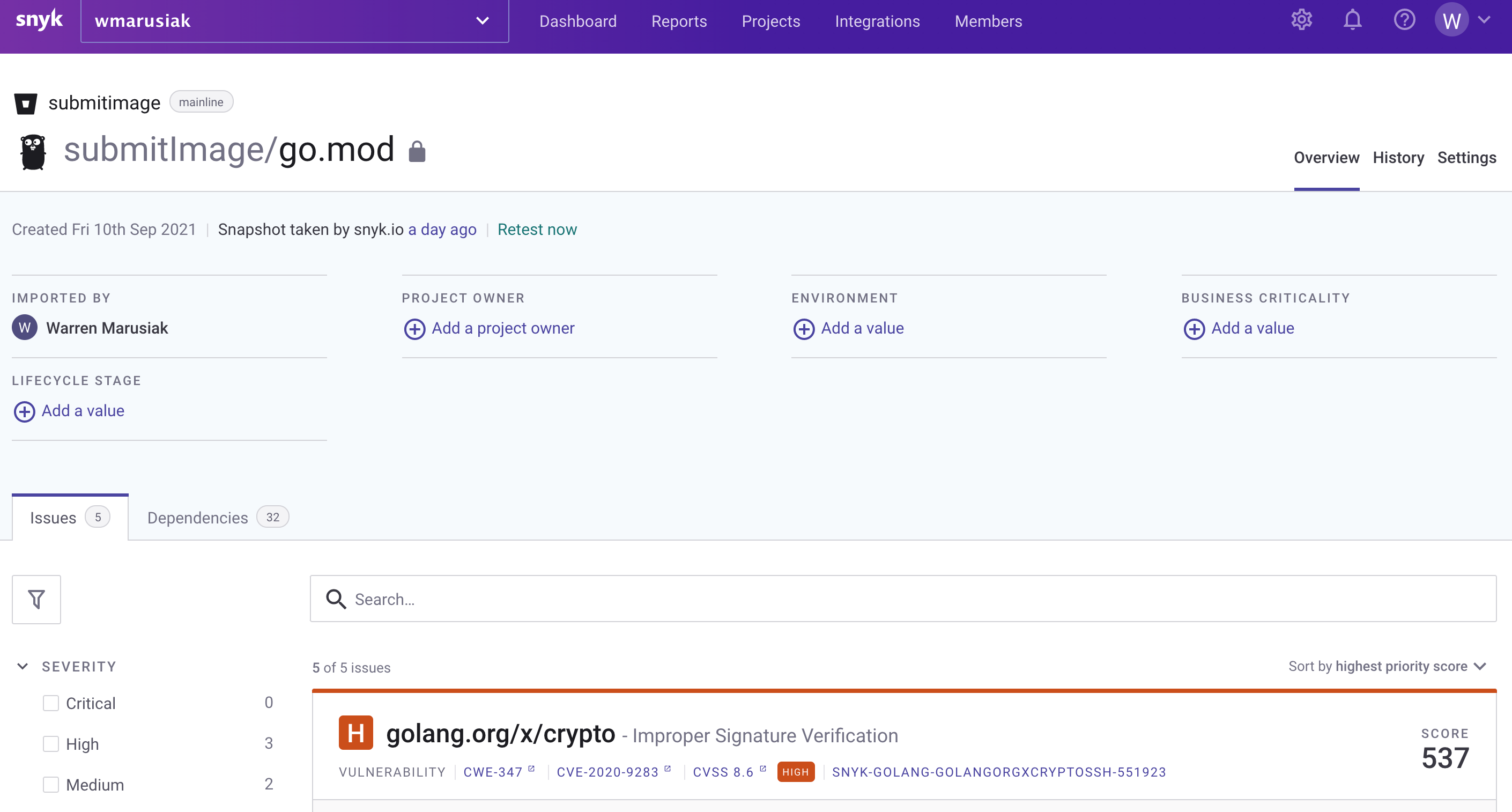 Below is an example of a vulnerability report in Snyk. A hierarchy of where the vulnerability comes from is shown in the Detailed paths section. In the example below, you can see that SubmitImage inherits this vulnerability from the AWS Golang SDK. Snyk summarizes the status of all issues on the left. in this case, none of the issues are fixable. Notice there are five No fix available issues under Fixability. This means that there is no current mitigation available for these issues. Developers can monitor the integration, and apply fixes as soon as they are available. 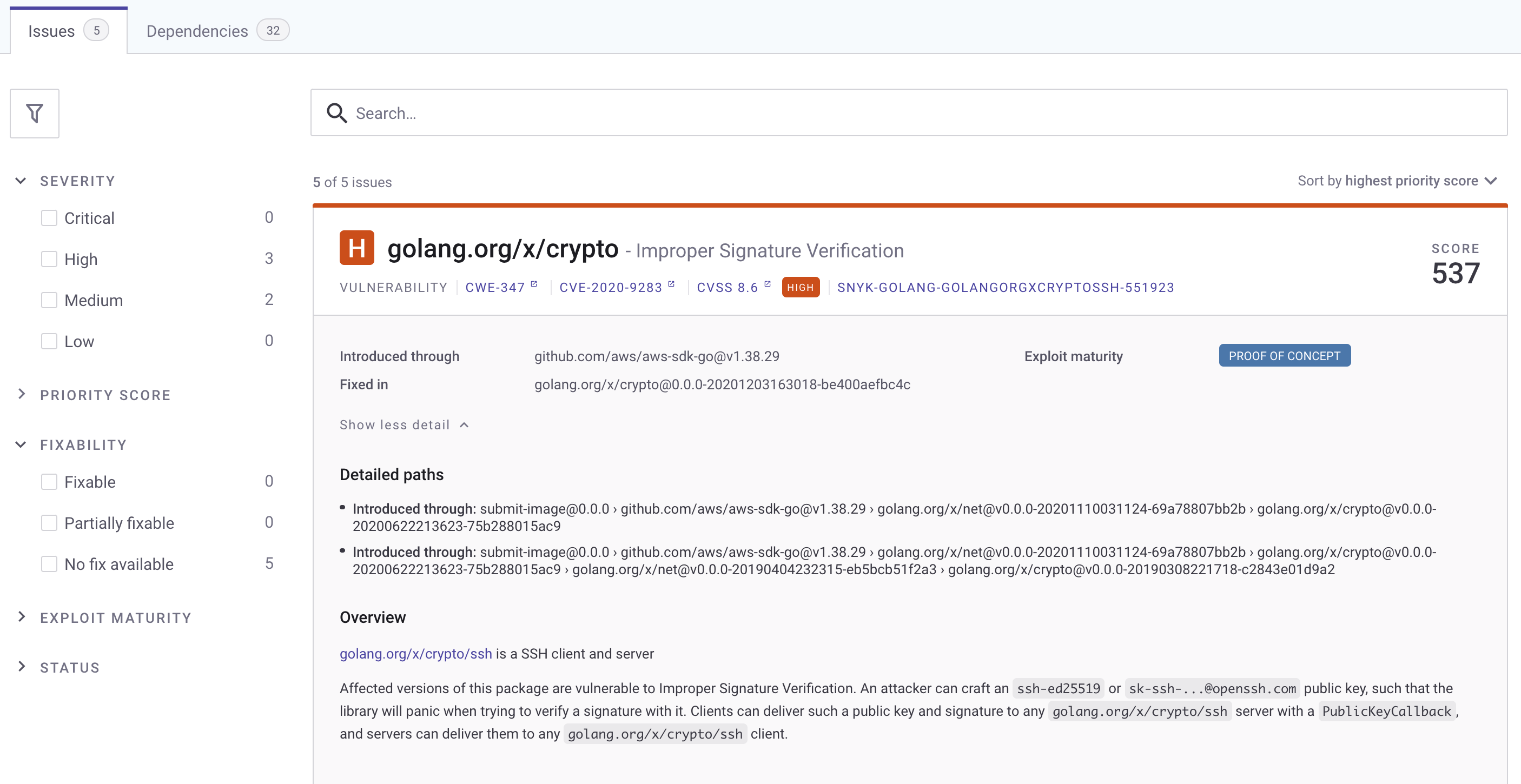 Add a Snyk step to bitbucket-pipelines.yml

In addition to accessing Snyk via the Bitbucket user interface, Snyk functionality can be accessed via Bitbucket pipelines by adding steps to bitbucket-pipelines.yml files. This means that vulnerability scanning will take place automatically on every commit and alert you of any security vulnerabilities.

Below are two bitbucket-pipelines.yml snippets for running Snyk tests as part of a pipeline.

This example illustrates how to run snyk test for a Golang project using Go modules for dependency management.

This example illustrates how to run snyk test for a Python project using Pip for dependency management.

Here is what this looks like when the runsnyktest step is run in a Bitbucket pipeline.

The practice of integrating security into your CI/CD pipeline is a core tenet of DevSecOps. DevSecOps advocates that security should be applied to each phase of the typical DevOps pipeline: plan, code, build, test, release, and deploy. By incorporating security into your workflow, it becomes an active, integrated part of the development process vs an afterthought. This means safer apps, fewer incidents, and happier customers.