Use a Git branch to merge a file


Being a space station administrator comes with certain responsibilities. Sometimes you’ll need to keep information locked down, especially when mapping out new locations in the solar system. Learn about branches to update your files separately from the main source and only share your changes when you're ready.

A branch represents an independent line of development for your repository. Think of it as a brand-new working directory, staging area, and project history. Before you create any new branches, you automatically start out with the main branch (called  master ). For a visual example, this diagram shows the  master  branch and the other branch with a bug fix update. 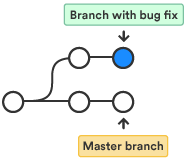 Branches are most powerful when you're working on a team. You can work on your own part of a project from your own branch, pulling updates from  master  if necessary, and then you'll merge all your work into  master  when you're ready.  Our documentation  includes more explanation of why you would want to use branches.


Step 1. Create a branch and make a change

Create a branch where you can add future plans for the space station that you aren't ready to commit. When you are ready to make those plans known to all, you can merge the changes into your Bitbucket repository and then delete the no-longer-needed branch.

It's important to understand that branches are just pointers  to commits. When you create a branch, all Git needs to do is create a new pointer—it doesn’t create a whole new set of files or folders.  Before you begin, your repository looks like this:

To create a branch, do the following:

Your space station is growing, and it's time for the opening ceremony of your Mars location. Now that your future plans are becoming a reality, you can merge your future-plans branch into the main branch on your local system. 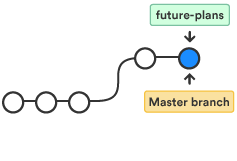 This branch workflow is common for short-lived topic branches with smaller changes and are not as common for longer-running features.

To complete a fast-forward merge do the following:

Here's what you've done so far:

Next, we need to push all this work back up to Bitbucket, your remote repository.


Step 3. Push your change to Bitbucket

You want to make it possible for everyone else to see the location of the new space station. To do so, you can push the current state of your local repository to Bitbucket.

This diagram shows what happens when your local repository has changes that the central repository does not have and you push those changes to Bitbucket . 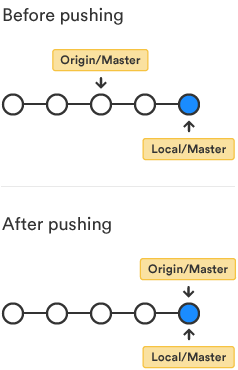 Here's how to push your change to the remote repository:

It’s time to take a break, drink a beaker of astro-vit (we all drink astro-vit on the Bitbucket space station), and marvel at your new-found powers. But don’t get caught stargazing for too long - You don't want to miss out on  the challenge of updating a teammate's repository .

Not sure you will be able to remember all the Git commands you just learned? No problem. Bookmark our Git commands page so that you can refer to it when needed.

Ask the Community
On this pageStep 1. Create a branch and make a change Step 2. Merge your branch: fast-forward merging Step 3. Push your change to Bitbucket You are done!
CommunityQuestions, discussions, and articles